Female pattern baldness is very common. Studies show that incidence of hair loss in women increases from 3% in their twenties to 30% of women in their eighties. Approximately one quarter of all women are affected by some hair loss by the time they are in their fifties.

Women go to great lengths to hideit cosmetically with various hair styles and treatments but the hair loss is common and can be emotionally traumatic. 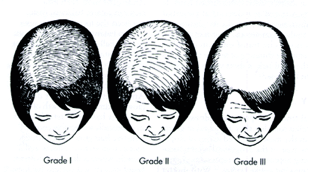 The patterns of hair loss in women are not as easily recognizable as those in men. Unlike hair loss in men, female scalp hair loss may commonly begin at any age through 50 or later, may not have any obvious hereditary association, and may not occur in a recognizable “female-pattern alopecia” of diffuse thinning over the top of the scalp. A woman who notices the beginning of hair loss may not be sure if the loss is going to be temporary or permanent—for example, if there has been a recent event such as pregnancy or illness that may be associated with temporary hair thinning.

In women as in men, the most likely cause of scalp hair loss is androgenetic alopecia—an inherited sensitivity to the effects of androgens (male hormones) on scalp hair follicles. However, women with hair loss due to this cause usually do not develop true baldness in the patterns that occur in men—for example, women rarely develop the “cue-ball” appearance often seen in male-pattern androgenetic alopecia.

Patterns of female androgenetic alopecia can vary considerably in appearance. Patterns that may occur include: 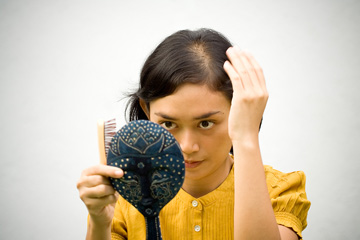 In post-menopausal women, for example, hair may begin to miniaturize and become difficult to style. The precise diagnosis should be made by a physician hair restoration specialist.

CAUSES OF HAIR LOSS IN WOMEN

In women more often than in men, hair loss may be due to conditions other than androgenetic alopecia. Some of the most common of these causes are:

Alopecia areata – a possibly autoimmune disorder that causes patchy hair loss in women that can range from diffuse thinning to extensive areas of baldness with “islands” of retained hair. Medical examination is necessary to establish a diagnosis.

Triangular alopecia – loss of hair in the temporal areas that sometimes begins for a woman in childhood. Hair loss may be complete, or a few fine, thin-diameter hairs may remain. The cause of triangular alopecia is not known, but the condition can be treated medically or surgically.

Scarring alopecia – hair loss due to scarring of the scalp area. Scarring alopecia typically involves the top of the scalp and occurs predominantly in women. The condition frequently occurs in African-American women and is believed to be associated with persistent tight braiding of scalp hair. A form of scarring alopecia also may occur in post-menopausal women, associated with inflammation of hair follicles and subsequent scarring. We also refer to this as traction alopecia, a slow chronic pull on the hair root that eventually kills the root system causing balding.

Telogen effluvium – A common type of hair loss caused when a large percentage of scalp hairs are shifted into “shedding” phase. The causes of telogen effluvium in a woman may be hormonal, nutritional, drug-associated, or stress-associated. Loose-anagen syndrome—a condition occurring primarily in fair-haired persons in which scalp hair sits loosely in hair follicles and is easily extracted by combing or pulling. The condition may appear in childhood, and may improve as the person ages.

Postpartum Alopecia – Another common form of hair loss, postpartum alopecia is caused by hormonal changes during the course of a pregnancy. The changes cause an alteration in the growth pattern of the hair follicles. There is usually very little sign of these changes during the pregnancy itself, but rather a sudden and very excessive loss of hair from three to nine months after the birth of the child. While this is often very traumatic for the new mother suffering from the hair loss, the hair’s growth cycle typically returns to normal within a year after the end of the pregnancy. Therefore, hair transplantation is not a necessary treatment option.

Hypopituitarism and Thyroid Disorders – Female hair loss can be the result of a hormonal change or imbalance. There has been a report describing a young women with hypopituitarism who presented with clinical and histological features of female pattern baldness in the absence of detectable levels of circulating androgens (testosterone and other male hormones) showing this pattern of hair loss is not androgen dependent. Hair transplantation is usually not an initial treatment option in these instances.

Accident or Surgery Related – Women who have had facelifts or other procedures in the scalp that have left scars or, as in the case of brow lifts, has left the hairline too high. In general, these types of hair loss respond well to transplants.

If you are a woman with thinning or lost scalp hair, your first necessary step is to have the condition correctly diagnosed by a NuHart hair restoration physician specialist.